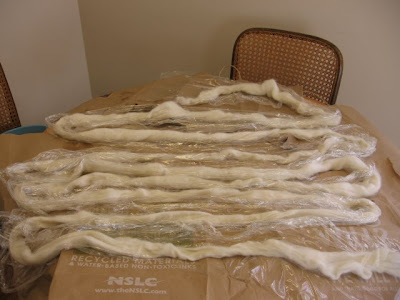 I bought some Majic Carpet Dye yesterday from Gasperau Valley Fibers as well as some white Polswarth. The dye is meant to be used for rugs, but it works on wool and came in a handy kit of a bunch of colors, so I thought I would give it a whorl. I laid out my wool on some plastic wrap (after soaking it in vinegar and water). I then mixed up some red, orange and yellow dye into some mason jars, then splotched it on the wool randomly. There are no pictures of this step as I was covered in dye. I then wrapped it up and put it in a double boiler for 20 minutes. I bought a cheap enamel double boiler for this because I know that you are not suppose to use it for food after it has been used for dye.

I waited until it was room temperature, rinsed, and this is what I got! 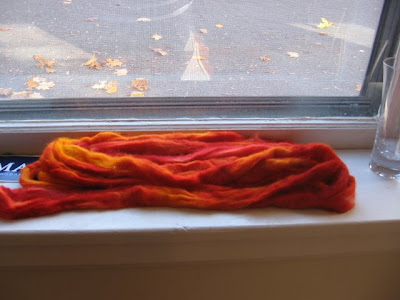 It was really hard to get a picture because it was DRIPPING wet. 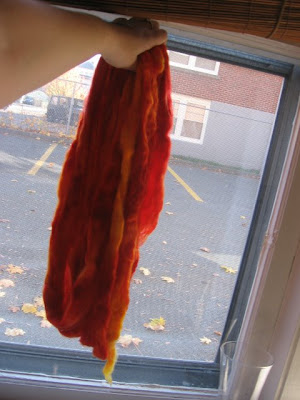 I am really happy with how it turn out! I can't really tell what it will be like as yarn, but I think it will be really pretty. 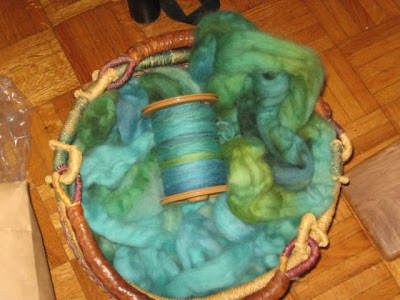 Currently on my wheel I have some Polswarth from London Wul. Pretty eh?
Posted by Maggie Tipping at 1:10 PM