I am still plugging away at my lace border. It does look like I am making progress, but at the same time I have so much more to go. It really wouldn't take that long if I would just sit and do it for a couple hours, but I keep picking it up and putting it down again after only one repeat. Plus I am using Brittany's because they are the only dps I have, and they are really truly awful for lace. Don't get me wrong, I love Brittany's for things like hats and mitts, but for lace they really truly blow. Especially after using lace addi turbos. I feel like I am trying to knit with unsharpened dowel.

In other news I did my gauge swatch for my sock pal's sock. I think I am going to take that with me to the cottage this weekend. We all know socks are a great travel project. I think I am going to do a mini cable pattern. I really enjoy knitting that pattern, and my pal has specified that he/she doesn't like slouchy socks, and the mini cables have a really nice elasticity.
Posted by Maggie Tipping at 7:46 AM No comments: 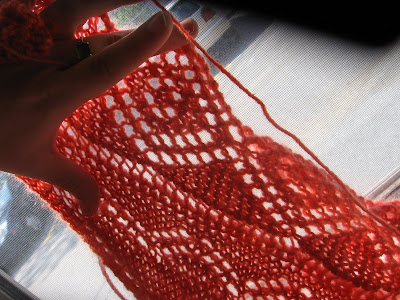 I have started the lace border on the spirit of the southwest shawl and I have come to the sad conclusion that I will never ever finish this border. Seriously, I am going to be at least 100 by the time this thing is done. Ok so maybe it isn't THAT bad. But it is pretty bad. The problem is that the rows are so short it is really hard to get into any sort of flow with it. Plus the 24 row repeat is really hard to memorize so I have to look at every row and make sure that I am following it right. Still it is pretty eh? My customers for this shawl are coming to look at it tomorrow, as well as to give me some of the lace weight that they have ordered :) 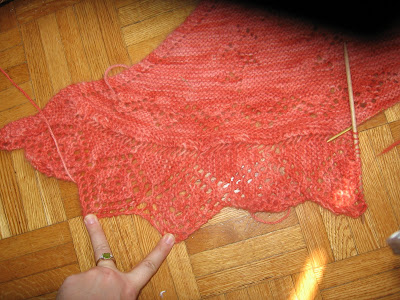 Posted by Maggie Tipping at 9:32 AM No comments: 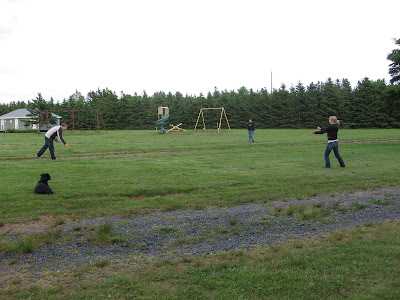 Our trip to PEI was great. It threatened to rain enough that we had the whole campground to ourselves, but it never actually rained so we had great weather. We built a huge fire and had sausages and ribs with potato salad, hummus, and spinach dip - and of course lots of beer. 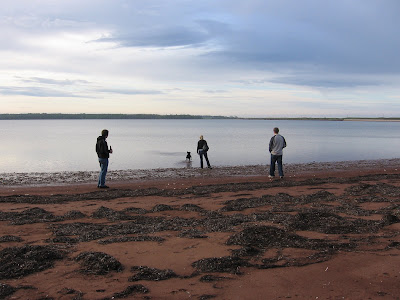 While in PEI I went to one of my favorite yarn shops Mini Mills, they are an actual mini mill, and they sell mill equipment. They also sell yarn, and since you are buying it direct from the mill, the prices are really reasonable. They have a wide selection of merino wool and some great cashmere and quivit blends. I was a little disappointed this trip though because I had some questions for the shop attendant and she was really uninformed about the yarn. I did get some great sock yarn for my sockapolaza pal though :) 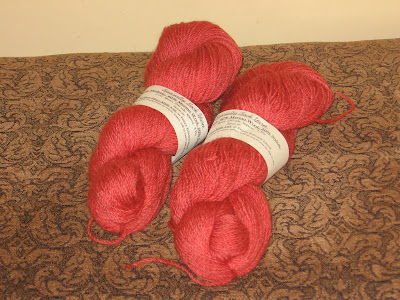 Julie and I went walking in Long Lake today, and I spotted this beautiful lady slipper. The lady slipper is endangered, and it is illegal to pick them. It is also the official flower of PEI. 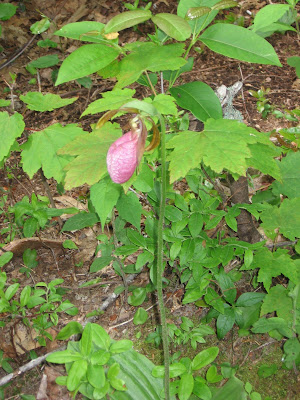 Here is a lace blob. I posted this picture just so you could see how beautiful the colors are. Aren't they great? This was dyed by Janine Stewart who has been working at starting up her own company - Give it a Whorl Fibers. You can read a little about her here. 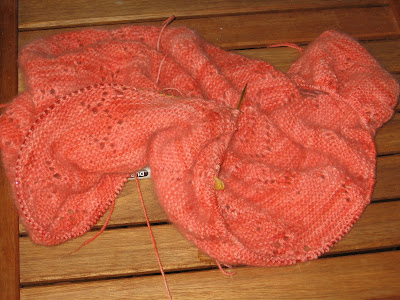 This next shot is a little bit of my work in progress. It's too big now for me to get a good shot of it, but when it is done and blocked I can get some great pictures. The pattern is Spirit of the Southwest from Fibertrends and I really love it. The garter stitch lace is pretty, and I get a rest every second round :) 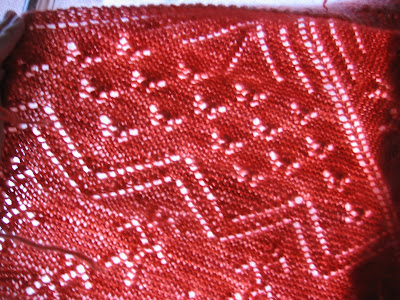 The second from the top lace is called butterfly lace. Isn't it beautiful?
Posted by Maggie Tipping at 8:39 AM 1 comment:

I have been so on edge waiting to hear back from the job that I applied for that I have been finding it really hard to concentrate on blogging. I was suppose to hear yesterday or today, but no word yet. Anywho they said that they would let me know either way, which is great.

I have finished a beaded shawl and started another beautiful shawl which I will post pictures of shortly.

In the meantime though I am going camping this weekend. Yay!
Posted by Maggie Tipping at 3:44 PM No comments:

So I had a job interview yesterday. Great right? I was really excited about it, and I kind of let myself think that I was going to get the job before I even went for the interview. I really don't think I got it though, things went well I am just not sure I was what they were looking for. It's disappointing, I really wanted to start working :(

So I am feeling pretty bummed about the whole thing. I am just working hard to remind myself of all the things I do have. I have lots of great friends, I have a nice apartment, I have a working car, I have cashmere yarn and I have a adorable kitty. Things will be OK, I know they will, it's just hard not to be frustrated.
Posted by Maggie Tipping at 2:56 PM No comments:

I am the world's worst blogger. I have been back in the city for almost a week now, unemployed at that. And I have not been able to bring myself to update. I don't know what it was, I think I just kept thinking "I really should..." and that brought out the procrastinator in me. Now that I am back in the city though I should be updating regularly.

So I am all done school, until I start my Master's anyway. For the first couple days after I finished fieldwork I had this horrible constant feeling of "now what?". I am doing better now. I am looking really hard for work, if I find something that will be amazing, but if I don't I will have a summer of fantastic knitting.

I am working on some more lace shawls for the cashmere farm. They have sent in their wool for this year and they are getting ALL of it turned into lace weight, mostly for me to make into creations from Victorian Lace Today. So I will have the honor of making some really fantastic garments this year. I will post a picture of what I am working on a little later, first I have to show you some pictures from my last visit to their farm, which is a true fiber farm! 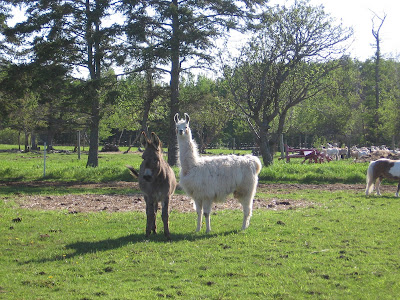 These are the guard animals of the two flocks. I had heard of people using donkeys are guard animals, but not llamas. So I thought that was pretty cool, and of course you can use the llama's wool too! I have never knit with it before though, have any of you? The owner asked me what the wool might be like and I wasn't sure. 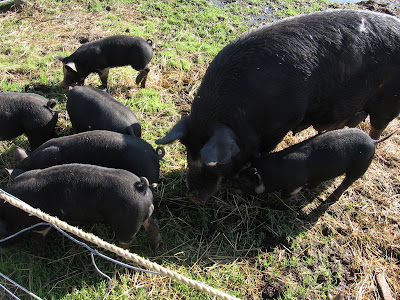 They also have a lovely little herd of Berkshire pigs. I had never seen them before but I guess they are a heritage breed, sort of the original pig. This poor mama pig had EIGHT little ones following her around squealing at her. I was amazed at her patience, I think I would have lost it. 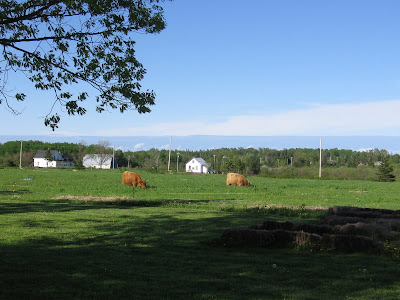 They have highland cattle, which you can also use the wool of. I don't think it is knit with, but I think something else is done to it to create ties, vests etc. I don't really know the details, but I thought that was an awesome use of a cow. 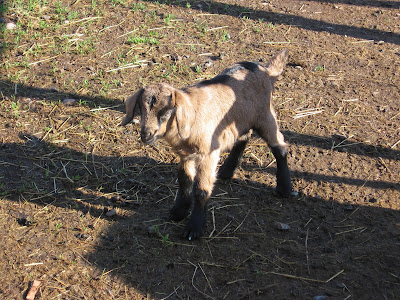 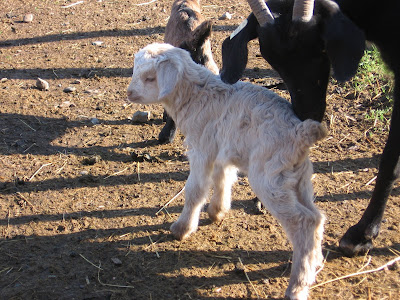 And of course there was the cashmere goats. And, babies! They were so sweet and wonderful. I can't get over what a fine life the cashmere goat has, all he has to do is sit around, lounge the fields, eat, and grow hair. I could do that!
Posted by Maggie Tipping at 9:17 AM No comments:

A grand announcement. As of today I am not longer an occupational therapy student but an actual occupational therapist!! I have finished all my degree requirements! Now all I have to do is find a job!
Posted by Maggie Tipping at 4:32 PM 5 comments:

So what have I been up to for the past few weeks? Well things have been really crazy. I am approaching the end of my last fieldwork and am still unemployed so I have been really stressed about the idea of spending my summer losing money and twiddling my thumbs. My class had its convocation and I had the unbearable task of saying goodbye to all the amazing people that I have spent the past three years with. And today one of my bestest friends is moving back to Maine. So it has been a couple weeks of transitions and stress and I just havn't been able to think about blogging.

There have been some positive events though! Lionel and Julie took care of two boxer puppies for the past week and I got to spend some time with them. So now I can share some of the absolute bundles of cuteness with you! 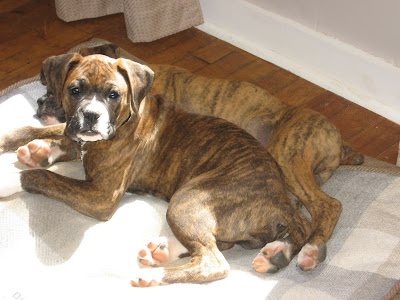 Here they are snuggling on their bed. Yes they share a bed. And they cuddle with each other. Too cute! 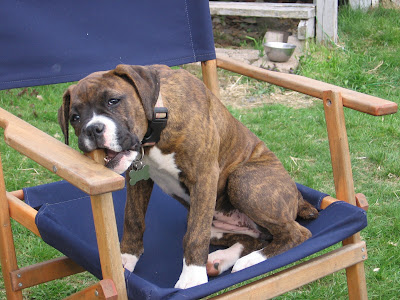 And here one of them is being very naughty. They have already destroyed several pieces of yard furniture with they puppy need to chew everything in sight. 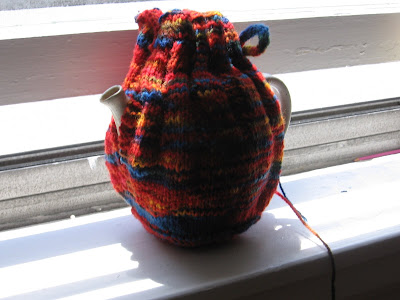 But I have managed to get a little bit of knitting done. I am on a bit of tea cozy kick and here is one of my products. Pretty simple. I have some great ideas though for some more patterns that I can design. Especially if I make the kind that goes on top of the teapot like a hat. Basically it is just like a floppy hat. So I am gonna try that out a bit.
Posted by Maggie Tipping at 11:43 AM No comments:

I am really sorry guys. I truly am the worst blogger ever. I know I have been really bad about updating. But I am home for the weekend right now and I promise a nice update (with pictures) this weekend :)
Posted by Maggie Tipping at 7:03 AM No comments: