Our new kitten is here. We have named her Chase, or rather Mike named her Chase. She is named after Margaret Chase Smith, a republican senator from Maine. I was a little turned off at the idea of our kitty being named after a republican, but Mike assured me that she was a moderate, and that she did some great things, like opposing Joseph McCarthy. So Chase it is! 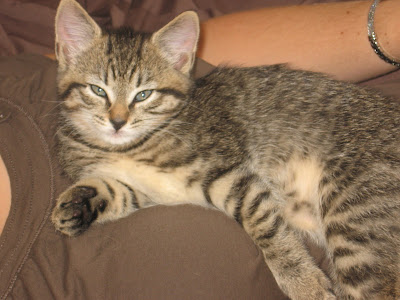 She has been settling in well. We took her to the Vet first thing this morning after we picked her up. We wanted to get her tested for Feline Leukemia, because her mother was a stray and we didn't want to risk exposing Hobbes to that. She checked out clear, got her vaccinations and we took her home. 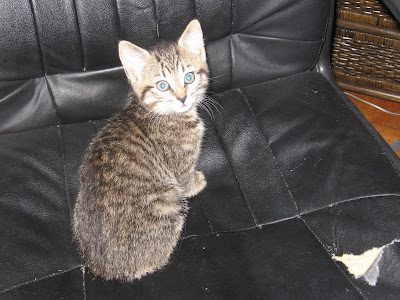 She has been sleeping for most of the day. I think that the vaccinations really wiped her out. I remember Sage was like that, whenever she got her shots she was sleepy for a few days... Hobbes just never gets sleepy, vaccinations or not!

We have introduced her and Hobbes. We kept them separated at first, but Hobbes sat on other side of her door and purred and meowed so much that we felt like he had no intentions of hurting her. Overall they have been pretty good so far. She has hissed at him a couple times, and he tried to chew on her neck, but I think that they are working things out. Hobbes even tried to come have a snuggle with her! 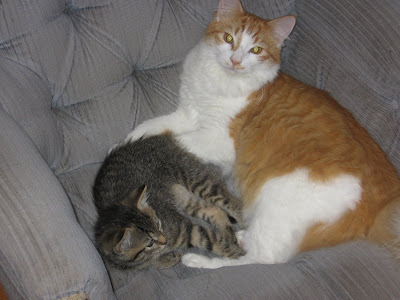 Mike and I are still very much grieving Sage. I still can't talk about her without crying, but we are starting to feel a little more like ourselves. We have decided though that we are going to get another kitty. At first this felt a little disrespectful to our dear Sage's memory... but we know that we are a two cat household, and that we won't feel at all ok until we have two cats again. The new kitty will not replace Sage, no cat ever could, but she might help to fill a little bit of the hole in our house and hearts.

We have in fact selected a new kitty. A friend of mine that I work with took in a stray cat a few weeks ago, he really isn't a cat person, but he took pity on this sick pregnant kitty that he found. Well, she had three healthy kittens, and they are all eight weeks old now. He took them to the SPCA, but they said that they were full... well I just couldn't let a kitten go homeless... So we went out to look at them last night, and fell in love with this tiny short haired tabby. I am picking her up tomorrow, I am sure that pictures will be posted.

By the way, I really have been knitting, and spinning, a lot! I really have to get around to taking some pictures!
Posted by Maggie Tipping at 5:45 PM 2 comments: 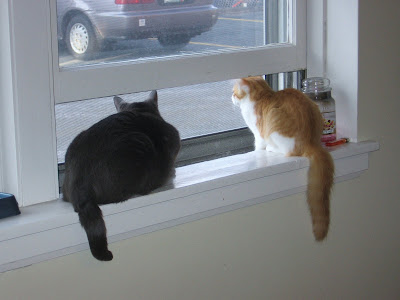 Thank you everyone for all your kind words. I really appreciate it. This is a really difficult time for Mike and I, and it is nice to have your support. I am still in a tremendous amount of pain, but at least the pain is settling into more of a dull ache than a stabbing knife.

I also wanted to thank everyone who reminded me that it is not my fault. Rationally, I know this... I know that I was just doing what I thought was best. But there is still part of me that just feels like I let her down. Like she needed me, and I wasn't there for her. I just hope that in her last moments she was still drugged enough from the surgery that she wasn't in pain and wondering why I abandoned her.

I am still waiting for the autopsy results... after it is all finished they are going to give us her ashes. We plan to bury her at my parent's house, on top of a hill that overlooks Wayne's vegetable garden. I hope that she can be at peace there. I hope she's at peace now... although Mom did remind me that she was never very good at adjusting to change, so it might take her a few weeks to settle in.

I hope that as a little more time passes, and I can start to hold myself together a little better regular knitting posts will resume. Right now I am not quiet in the mood to blog about knitting... but I am sure I will be soon.
Posted by Maggie Tipping at 10:34 AM 3 comments: 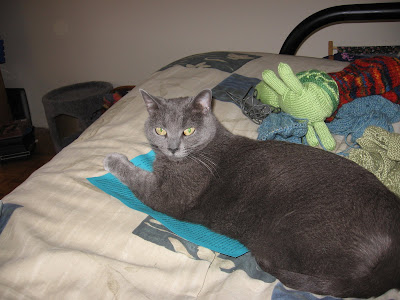 Today has probably been one of the worst of my life. I took Sage in to the Vet for a routine dental procedure. I went to two different vets and both said that she probably need both canine teeth extracted. I really hesitated to get the surgery, partly because it was about $1000 but in the end I decided it was the right thing to do. The vets both told me that she was probably in chronic pain from the teeth, and that pulling them would enhance her quality of life.

I wish I had never listened.... I called the vet at 12:30 from work and they told me that although the surgery had gone really well, she had even woken up afterwards.... she suddenly stopped breathing and they were unable to save her. We lost our Sage kitty.... we still don't know what happened but they are going to do an autopsy and let us know.

I can't even express the grief that I am feeling. Sage was a really important part of our lives. She was sort of a "special needs" animal, and Mike and I always tried to do right by her and make sure she was comfortable and happy. I am going to miss her so much. The worst part is that I can't help but feel like it's all my fault for taking her to the vet. If I hadn't taken her there this morning she would still be here right now, and I would still have my Sage.

So goodbye Sage... we will miss you. You were the bestest, craziest, most special, most loving kitty we have ever had. We love you.
Posted by Maggie Tipping at 4:22 PM 10 comments: