Thank so much for all the support guys. I considered talking to my prof again as I do work with her ratherly closely on a lot of things, and I really respect was she has contributed to our field. But I think I will just drop it. There is only a week of orientation left and then I can leave it behind me... although I don't think I will ever forget it. I really appreciated what all of you said and really thought about it a lot. I especially valued what Steph said in that she probably walked away thinking that she had helped me out professionally having no idea that she had hurt me personally. Non knitters really don't know how attached to knitting Knitters are.

Thinking about what happened to me though as also helped me better understand occupational therapy theory. In a lot of theory they talk about how the everyday occupations (not just work - thinks that occupy our time are occupations) can sometimes become very meaningful to us. Some occupations become part of our roles and habits, and really become about our spirituality and how we see ourself as a person. I can't think of a better example than knitting as an occupation that is integrated into my life, has defined me as a person and is essential to my being.

On the lighter side of things, I cast on last night for a swatch/hat for the percentile sweater I am going to make. I hate making swatches so I took EZ's advice and am making a hat instead for gauge. I assure you the hat looks a lot nicer in real life. The color is almost a jet black, but if I got a picture where the color was accurate you wouldn't be able to see the stitches. 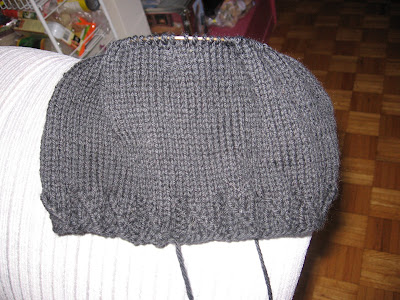 I am really happy with how the fabric feels. I think it will be the bestest sweater ever :)

Also, when I was at the Yarn Harlot event I asked her a question about knitting in bars. My friend Jane has often seen me knit in bars, and she often does it to. On her blog she has coined the term pulled a Maggie for knitting in bars. I am touched :) I have always wanted my name to become a saying.
Posted by Maggie Tipping at 6:24 AM

Your way of dealing is so much more mature than my suggestion. Good decision. :)

When I busted my hand up, I did about three months' intensive occupational/physical therapy (three days a week) and another year's worth more casually (monthly visits). I can't say how delighted I was to find out that knitting would work for me as ongoing therapy - especially after half a year spent thinking I'd never knit again at all.

Oh I miss seeing you knit in a bar.